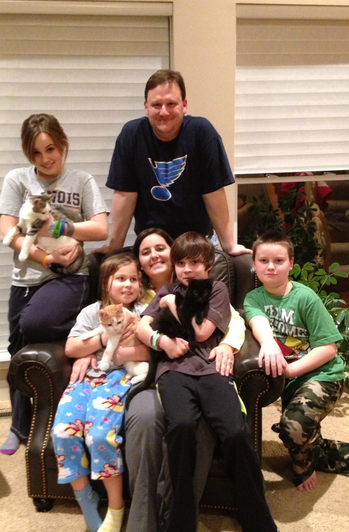 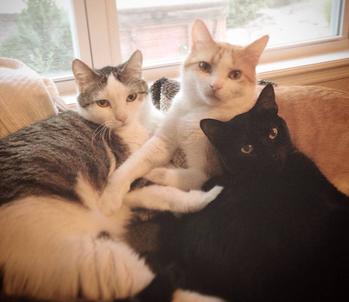 When we started talking about getting a playmate for our adult female cat, we knew there were some common sense rules…. We wanted a male, we wanted a young cat (to avoid the possibility of two fighting adult cats), and we knew we had to do it at the right time. Vacations, no available cats that met our parameters, nothing that fit our adoption timeline and countless other things seemed to keep getting in the way.

Then one night we saw a little orange and white – and very sick – kitten named Sammy on Marci’s Facebook profile. Tera immediately fell in love with him and we started to talk to Marci about his situation, his health, etc. In the mean time, I suggested that we might want to look for a second young male kitten (after months of suggesting our one adult female Katrina was just fine alone, thank you) on the off – or likely – chance that Katrina didn’t take to a new little friend. Soon into that conversation, more pictures started popping up. There was a coal black handsome devil named Wally – also very sick – and a third good looking little fella named Jack, who happened to be Sammy’s biological brother (and also happened to be sick). But, as Marci explained, Wally may as well have been a brother to them as well. They were all the exact same age (within a day or two) and the three of them were in a fight for their lives together.

As Marci continued to nurse them back to health, we kept hearing that Wally was the most ready and most adoptable of the three – he would be ready sooner than any of them. I knew Sammy was coming home with us thanks to Tera’s affinity for him, and somehow Marci kept telling us Wally was coming as well (she’s a sneaky one!) Tera and our kids seemed pretty content with that. Still, though, I thought Jack was such a good-looking little guy. Quite the conundrum.

In the back of my mind, though, I knew there was no way we were bringing home two cats. No chance on earth – not JUST two, that is. I explained to Tera that while I wasn’t sure we needed another cat, I was sure that bringing home two was better than one. That said, I could not envision any scenario in the world that would take us to Springfield and pick up two previously sick kittens while leaving a biological brother behind. No matter the plan, there was no way that would ever happen. How could it? Could anyone actually do that? Not us. No chance.

After a weekend visit with the boys so we could get to know them, several weeks passed before they got a clean bill of health. So one Saturday we loaded up the kids and headed towards Springfield to pick up this trio and have never looked back. Brothers Sammy and could not be more different. They have similar markings and definitely look like brothers, but other than a strong desire to eat, eat and then eat even more (WAY more than Katrina or Wally) they’re polar opposites. Sammy is a brave little guy, always under feet, always happy to get some attention and always in the middle of things. He’s also happy to wake us daily at 5:45 a.m. to let us know he’s starving. Every. Single. Day. Jack, on the other hand, is usually hiding. He’s gotten much better and braver in the past several months, but he’s still rather skittish. Wally, meanwhile, also spends a lot of time out of sight. Except, mind you, when we have guests over. Then he’s suddenly the life of the party and craves attention. And while he can be aloof at times (he is a cat, after all), if a child is visiting the house you can bet Wally is their new best friend.

All three of these boys are very loving and clearly love each other very much. They’re sweet, they’re healthy (thanks to Marci), and they all love their big sister Katrina. And Katrina… she loves them too. Sometimes.

Getting siblings was the best decision we made. As kittens, Zeus and Zoe played together and wore each other out. They are now 5 years old and they still play together and keep each other company when we are gone during the day. I fully believe that bringing them home together helped the transition from their litter to our home go more smoothly because they had each other. I highly recommend taking siblings together, when possible, especially if you are gone often or don't have any other pets in the home. 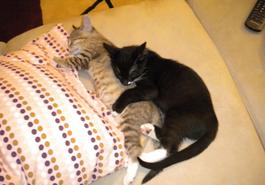 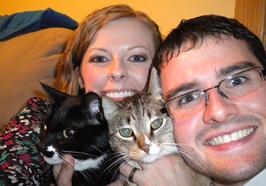 When we went to pick out a kitten from a litter of five, I was looking for a snuggly kitty that I could hold and that would sit in my lap. Right away I found my sweet Zoe. She was calm and relaxed and exactly what I was looking for. Zoe was too small to take home, so we kept going to visit her and her siblings. Each time we went over there, we noticed that Zoe and one of her brothers seemed to always be together. They were always snuggled up and if we separated them, the male kitty always meowed until we put them back together. It wasn't long before we decided to take them both home. We just couldn't bear to separate them.